Extrarius was born into a family of hunters. They hunted on a wizard’s land and killed his familiar. The wizard responded by visiting the family to release a fireball through their front door. Because he was six years old at the time, extra was asleep in in his bedroom. The sound of the explosion woke him. The wizard saw Extra climbing out his bedroom window to escape. Feeling a small amount of remorse, the wizard took Extra home and raised him to be a wizard.

When he was old enough to take care of himself, Extra rewarded him for his mercy by setting his house on fire. He left his homeland and came to Korvosa where he landed a job as a librarian’s assistant at a Wizard academy. They discovered that he had some magical talent and gave him a scholarship so that he could become a wizard in his own right.

Extrarius is always on the look out for information that his murderous adopted Wizard father may be coming to make him pay for the revenge burning of his home.

Extrarius is enamored of Basila Cazynsic. They share an interest in crossbows. Basila appreciates that Extrarius’ weasel familiar, Ophelia, keeps the bar clear of rodents. 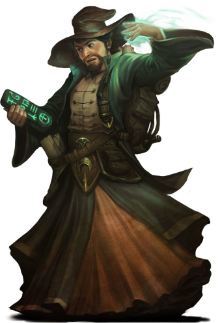