Father Padrick is an old, bald man of Chelish descent. His eyesight has mostly failed, and he appears rather frail. He usually dresses in a simple brown robe embroidered with Sarenite imagery. He wears a simple wooden holy symbol around his neck.

Father Padrick has been the curate of St. Caspieran’s Mission House in Old Korvosa for the past 30 years. Unfortunately, since his eyesight failed about a decade ago, the mission house has slid into a state of decline. Today, he relies on his assistant Jhonas to manage the day-to-day operations of the mission, while he works directly with the unfortunates that use the mission house services. Unfortunately, he’s also taken to drink, which has dulled his ability to properly supervise his assistant.

Update: In the spring of 4704, a group of adventurers confronted the Old Dock Boys, who had been using the mission house as their headquarters. Padrick came to understand that his mission had been taken over by criminals right under his nose. He realized that he had been relying on someone on the payroll of a Sczarni gang, and that his life’s work had almost been wasted. Padrick has since retired from the active clergy. The Church of Sarenrae has appointed a new curate, who hopes to revitalize the mission. 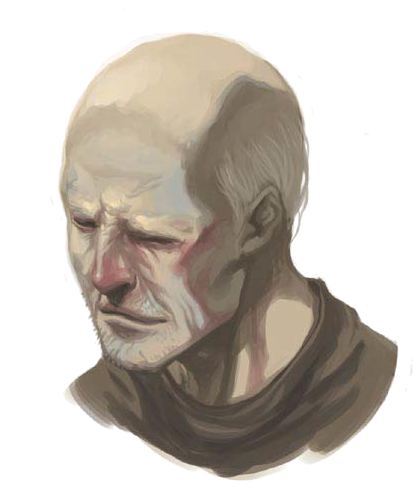