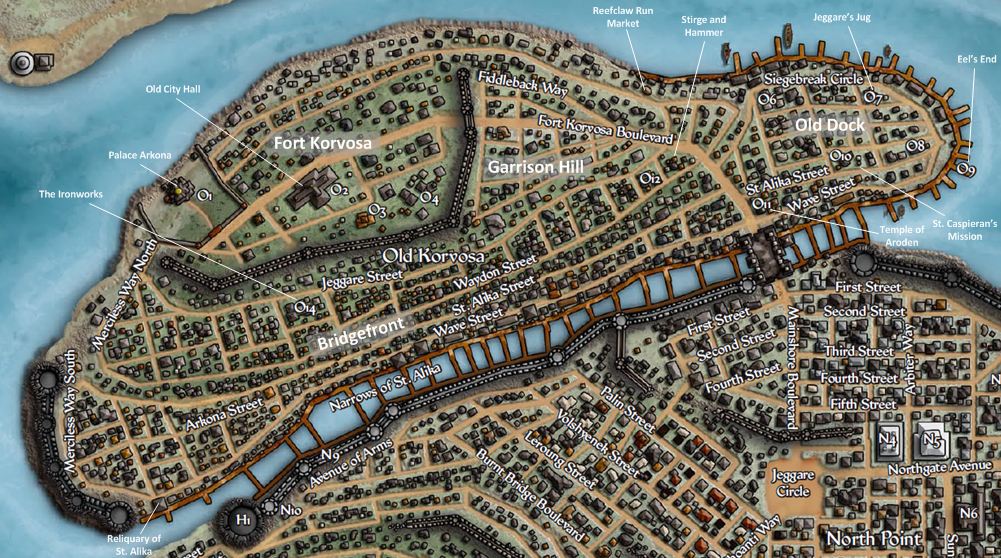 The district called Old Korvosa is the longest-settled part of the city. It covers all of Endrin Isle, which is connected by a series of woooden and stone bridges (official and unofficial) across the Narrows of St. Alika to the district of North Point on the mainland to the south. Old Korvosa slopes up from the nearly sea-level Bridgefront ward to 200-foot summit of Garrison Hill. Atop Garrison Hill stands the stone wall of Fort Korvosa, the original Chelish settlement in the city.

Ambrik House: Former orphanage run by the respected schoolmaster Marden Ambrik. A fire broke out in the second floor of the orphanage about 15 years ago. Ambrik and all 19 children perished in the blaze. The locals consider the place haunted, and it remains one of the few uninhabited buildings in Bridgefront.

Eel’s End: A clot of five ships, obviously no longer seaworthy, are permanently moored together on the eastern piers of Old Dock, resticting passage through the Narrows to the smallest of vessels. The ships of Eel’s End serve as one of the more dangerous entertainment complexes in Old Dock. These ships are the Goldenhawk (a flophouse for drunkards), the Twin Tigers (a racous gambling hall), the House of Clouds (a low-rent brothel), and the Dragon’s Den (a drug den). The fifth ship, Eel’s End itself, serves as the home and office of the owner of this dubious establishment, Devargo “Spider” Barvaski.

The Ironworks: One of the largest buildings in Old Korvosa, this foundry and smithy is also one of the district’s largest employers. The Ironworks produces all manner of iron and steel implements, from staircase railings, to farming tools, to weapons and armor.

Jeggare’s Jug: This boistrous tavern in Old Dock claims to be the oldest drinking establishment in the city of Korvosa. Named for one of the founders of the city, it is a matter of debate whether he ever drank there.

Marik’s Knackery: One of several butcher shops on its block. There are certainly better meats available from more skilled butchers, but no one beats Marik’s on price.

Old City Hall: The tallest building in Korvosa, this government building now serves as the offices of the Magistrates and Arbiters in charge of Old Korvosa. The actual city hall was moved to the present building in The Heights about 150 years ago.

Palace Arkona: An imposing fortress of black marble, the Arkona family purchased the original inner keep of Fort Korvosa and renovated it extensively into into the family palace. It now boasts bizarre architectural embellishments imported from distant Vudra— like statues of triple-headed elephants, peacocks weilding sabres, and beast-headed warriors mounted on tigers. An iron and stone wall surrounds the palace, which is always heavily guarded. The Arkonas are the most secretive of the Korvosan noble houses, but recently, the young Lord Glorio Arkona regularly appears in the district.

Reliquary of St. Alika: The Reliquary of St. Alika the Twice-Martyred stands along the shores of the straits that also bear her name, overlooking the mouth of the Jeggare River. The shrine houses a 12-foot-tall statue of the saint, with a smaller statue in an adjoining chamber honoring her betrothed. Because it’s in Bridgefront, the city government does not spend much to maintain the building, which has fallen into disrepair. In life, Alika was a paladin of Aroden, and was instrumental in guarding the fledgling community of Korvosa from goblin and Shoanti raids. She foresaw the Great Fire of 4429 and led efforts to combat the inferno, saving scores of lives, but perished in the flames herself.

St. Caspieran’s Mission: Established 40 years ago by the Church of Sarenrae, this mission house serves the poor and downtrodden in the city’s poorest district as a soup kitchen and a flophouse for the destituite. Or, at least it used to. Father Padrick, the priest in charge, is getting on in years, and the day-to-day operations have fallen on the building’s groundskeeper. The mission house has fallen into disrepair, and while its doors are still open to the poor, rumor has it that a Sczarni gang has effectively taken it over, right under Padrick’s nose.

Stirge and Hammer:This modest building is one of the more popular inns located on Garrison Hill. Vasaro Cazynsik and his daughter Basila run this friendly tavern, which caters to the working-class denizens of Old Korvosa that have a few shields to spend on well-made ale. Vasaro operates a small brewery on premises, and offers three excellent beers: a strong stout called Old Blind Stirge, a dwarven-style brown ale called Torag’s Hammer, and an extra-special bitter called Martyr’s Draught (named for St. Alika the Twice-Martyred, the patron saint of Korvosa.)

Temple of Aroden: In the hundred years since the death of Aroden, this once-grand structure in Old Dock has fallen into near-ruin. Father Vonn Benwith kept the faith for six decades, preaching that Aroden’s apparent disappearance was but a test of faith. Hiis son Rilk took the green-and-white mantle of the priesthood after his father died forty years ago. Now well into his seventies himself, Father Benwith tends the handful of Arodenite worshipers with a weekly Sunday service. It’s hard to tell whether this tiny congregation is truly faithful, merely curious, or are there just to mock the servitor of a dead god. There are rumors that a much-younger Arodenite priest has been assisting Benwith recently.

Reefclaw Run Market: The finest fishmonger in the city of Korvosa. The city’s most skilled chefs frequent this market purchasing fresh seafood. Rumor has it that this market is also an excellent place to send messages to noblemen via their chefs.

by: Mike_Ferdinando
See All Pages